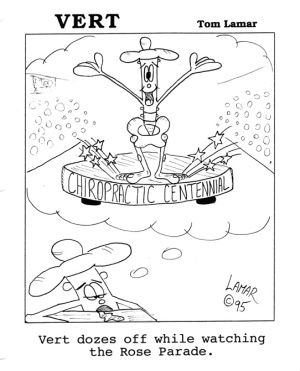 Vert dozes off while watching the Rose Parade.

This particular cartoon could be classified as an editorial cartoon.  1995 was the Centennial Celebration for chiropractic.  So to help celebrate and let the public know, our profession entered a float in the Rose Parade.  Well, in my opinion, a float with an eagle on it would not have been my first choice.  Maybe they hit a close-out sale at the local Float Mart.  “Special on Eagles!”

Here we see Vert who has dozed off while watching the parade (who could blame him… it was very boring).  In his dream he envisions the appropriate choice of float to represent the chiropractic profession… himself.  Well, it made sense to me. 🙂